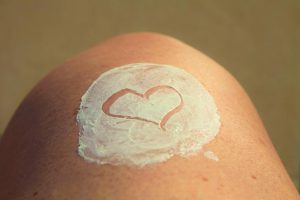 A massage specific to scar tissue is highly focused – not only on the scar itself – but also the tissue in the surrounding area. The presence of scar tissue is mostly permanent. The goal of this type of therapy is to soften it up, make it less noticeable, and increase mobility. It’s just an important to reduce the noticeability emotionally and mentally as it is physically.

This is done by integrating the scar with the rest of the body. Often times, many people may have an emotional connection with scar tissue – often negative. It reminds them of a past trauma or surgery. They may want to “mentally reject” and hide it.

So although one might view this type of massage as solely physical, it’s just as much emotional and mental. There’s a certain level of healing and acceptance that comes with this therapy. Someone should walk out feeling like the scar is part of their body – not some foreign fragment that they must deal with for the rest of their life.

When the skin is broken, the body immediately starts the process of protecting itself. Reducing further damage and infection is crucial. When such an injury occurs:

Collagen is hard, smooth, and contains no pigment. Hair follicles are not able to grow in the area. This is why scars tend to “stand out” among healthy skin tissue.

There are 2 main phases that occur in the process of scar tissue formation. During the “inflammation phase” collagen is being laid down, layer after layer until the next phase. The “remodeling phase” can last weeks or even several months.

And if proper function of the affected area is never restored after the remodeling phase, the scar tissue can become contracted or tight. There is generally little to no inflammation in this phase, but blood supply is also low as well.

The Goal of Scar Tissue Release

The goal is to support the affected area and make it feel subjectively better. As mentioned, the appearance generally doesn’t change much. But by creating that integration of the scar tissue into the rest of the body, pain and spasms in the area can be significantly reduced.

If you have physical or emotional scars due to a previous injury or surgery, and are wanting to feel “whole” by integrating your whole body as one, reach out TODAY for an appointment to get started.